Underground Mining Trucks AD63 is an underground mining truck that uses the Cat C27 engine type which has been certified EU Stage V with a payload of 63 tons without the need for a regeneration system. However, this engine requires ultra-low sulfur diesel with 15 ppm in order to help reduce diesel particulates in the exhaust so that air quality remains good. This quality is also maintained because of the aftertreatment that is maintained and wrapped in hot temperatures as well as the use of low ash CJ-4 engine oil so that it no longer requires CEM (Clean Emissions Module) because it has been replaced by both types of diesel and engine oil. which has been shown to be more efficient. This efficiency can be seen through adjustments between peak performance and operation so as to produce controlled engine management, especially when there are electronic sensors in it. That way, the improvements that will be obtained are not only reliability, power, and efficiency, but are also proven to be able to increase payload by 5%. 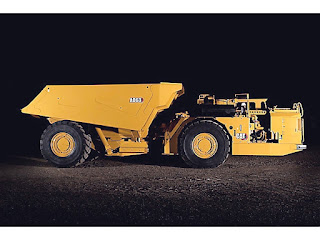 The nominal payload capacity of the AD63 is around 138891 pounds with seven body sizes that are much needed when working in underground mining, one of which is a new dump body with the option of two ejectors for constant power according to speed. The increase in payload was accompanied by an increase in powertrain performance, in which engine torque increased by about 10% which made grading capabilities superior due to the renewal of the gear ratio. Having these updated gear ratios can be very helpful in shifting strategies for the transmission, as the gear retention is at the right variable slope for a smoother ride on grades. As such, the torque converter includes a new converter with individual transmission clutches that can combine rim pull operation and bearing shifting for a more efficient powertrain without overloading torque by fast coupling reassembly for longer service life. In addition, this 795 HP gross engine is supported by intelligent technology, namely TLMS (Truck Load Measurement System) which has been configured to monitor the production of the AD63. 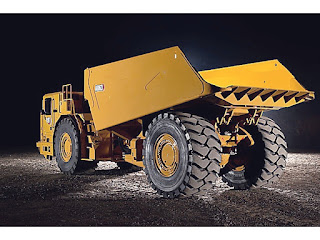 In the process of achieving optimal production, AD63 also strives to provide the best service in various ways. Such as the ease of accessing service points that are simpler with more efficient maintenance. The ease of service, if detailed, is the ease with which the compartment drain, lubrication points, and fuel filters can be monitored from a distance. Then with maintenance that is maintained the cabin can be tilted according to the access needs, and this certainly increases access to the brake accumulator, side of the cabin, and others. The cabin on the AD63 is also designed with a high level of comfort but very ergonomic, especially with ROPS and FOPS standards which are also equipped with thick padding to reduce pressure on the back. As for the safety provided, one of them is the HVAC system which is powered by a battery electric system to take full control to eliminate the fog that is present when operating. Moreover, it is equipped with a monitoring system either through a camera or Cat EMS (Cat Electronic Monitoring System) which is able to display important data on the screen periodically.