The R2900 XE is an improvement over the R2900G and is well known as the first product from Caterpillar with an underground electric diesel load haul dump (LHD) model that is superior and fuel efficient and easy to maintain or repair. The engine model he uses is the Cat C15 which is capable of supporting high productivity and has been configured to the Stage V standard, so that its advantages are increasing, especially in improving trimming and digging performance. Moreover, combined with the paint switched reluctance electric drive system which is a substitute for the mechanical transmission of the previous product, which this system consists of various functions such as the ability to control the engine through the implementation of virtual gears, creating smoother and faster performance, able to increase productivity more from R2900G, and others. Speed can also be controlled by the system, both variable speed and speed when the engine is operating, especially on an incline, so to maintain its speed it is necessary to carry out automatic deceleration control. 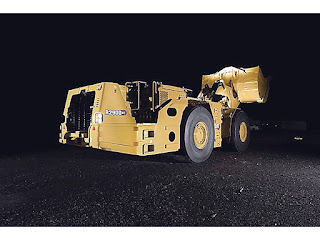 Various systems have been applied to this engine to maximize performance results without consuming a lot of fuel. The designed design is quite complex because it is carried out with various adjustments between one feature and another which also involves consideration of fuel to be more efficient. With a payload level of 40785 lb, this machine is able to operate with a fuel economy of about 31% through the presence of certain electric drive components that are also able to minimize greenhouse gas emissions. The structural design is in the form of mounting the front frame with Y pins and installing the correct Z-bar loader linkage geometry so that it can increase breakout and bucket loading with a strong breakout force. All buckets are pin collected with reverse articulation barriers which can make acceleration 52% faster with fast engine response.

This improved design on the R2900 XE is not only to prioritize high productivity, but also prioritizes safety, comfort, and better operator control. As with other Caterpillar products, the R2900 XE's cab has integrated ROPS and FOPS which are able to make the operator comfortable, safe and protected because its sturdy installation can reduce vibration, so the operator's vision will be clearer, and if something unexpected happens. emergency access is available. The other offering is a monitoring system for tire pressure and seat belts, which is also assisted by one of the safety features in the form of neutral creep. In addition to safety features, there are also comfort features in the form of air conditioning, a ride control system for smooth operation on uneven ground, controlled driveline shock, and an air filter system known as HEPA (High Efficiency Particulate Air Filter). With that said, the R2900 XE is highly recommended because of its well-known advantages, as well as the application of new technologies such as the Link Elite Product System, Autodic, and Cat MinestarTM.