The most productive Forest Machines, no less competitive, have more reliability, and the advantages of various features in them that are only issued by Caterpillar. One of the ideal types of machines is Forest Machines 568 with a net flywheel power that reaches 291 HP. The magnitude of this force is supported by greater hydraulic power making it easier to move the machine on precision control to move various materials such as trees, wood, and others in large quantities. This is of course also influenced by the type of engine used, namely the Cat C9.3 engine which has been tested and validated so that it is guaranteed to have Tier 4 Interim emission standards. With the use of this machine, there are three modes that can be selected on this 568, namely high power, standard, and economy. In addition, the advantages also lie in the fuel economy which is more efficient but the horsepower is actually more due to the use of a different engine from the previous type as well as an increase in the system in it. 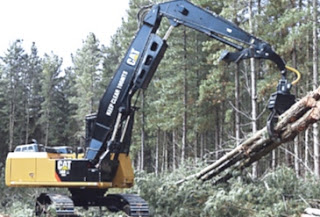 Based on this, it can be ascertained that the machine can work more efficiently, especially with the presence of hydraulic horsepower which improves the system in it so that work can be completed in a short time and optimal results. In addition, there are other features that make the engine more efficient, namely the swing priority circuit which is in charge of adjusting the configuration of the engine so that the results are more precise. Then there is also the so-called new electric boom regeneration valve which plays an important role when the operator uses the engine with a fast setting so that fuel economy needs to be increased, especially when the boom goes down the pump flow must be low so that the components can last longer as well because of assistance in engine control. As for greater reliability, the valve configuration is very simple by simply stacking the auxiliary valve above the main valve, which in the main valve has a role in changing the oil channel according to the selected control so as to facilitate maintenance. 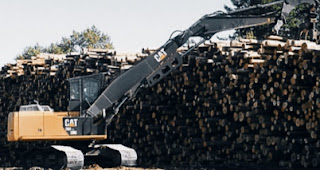 In addition to the efficiency gained due to these features, strong efficiency is also obtained from the Cat Link Product Technology which offers an engine monitoring system for several things such as fuel, time, location, etc. which are then immediately reported to the gated VisionLinkTM. In addition to this strong efficiency, it turns out that there is a heavy duty construction in this C9.3 category which makes a higher level of durability with minimal downtime risk, one of which is the presence of a heavy duty track roller equipped with track shoe bolts. There is also an upper frame and undercarriage system designed to support the ROPS cab with great strength and stability that is always applied to the application. In fact, the life of the undercarriage can be extended because of the guide guard which does an excellent job of keeping the track level. Other offers include operator comfort due to wider cabin space, cabin lock innovation, premium entry cabins, and others. So with all its advantages, there is no doubt about this 568 engine.