How to Respond in a Toxic Workplace Caused by the Boss

Posted by: Student Terpelajar Posting Komentar
In 2018, Oxford Dictionary made toxic its word of the year. Toxic work environment, toxic culture, and toxic relationship were among the top ten 'toxic' collocates in 2018. Business executives, managers, and disengaged employees create toxicity. But businesses don't monopolize toxicity. It engulfs charities and churches, too. Some charismatic leaders in mega churches set the tone for toxic workplaces by their narcissism and greed. 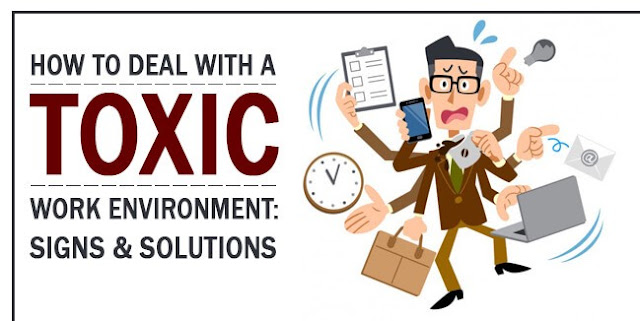 Spotting a toxic workplace can be simple, not only from within, but outside. We don't have to examine turnover statistics, reports, or interview anyone to know Donald Trump's White House was a super toxic environment. Here are a few signs of a toxic workplace:

Leadership is advancing others, not promoting self. Leaders set the tone and create safe workplaces. Leaders set and live core values. Values are our default position, our North Star. Doing what's right, period! Values include respect for individuals and families, trust, integrity, transparency, caring, rigor, good stewardship, and accountability.
Donald Trump and Justin Trudeau's actions showed no ethical guiding principles or core values. Trump pressured his loyal vice president - among others - to overturn certified election results. Trudeau pressured his attorney general to cover up his conflict of interest. Both acted in their best interests. Neither suffered legal consequences; thus, their message to compatriots: Core values are not beacons for decisions - the end justifies the means.Without consistent application of ethical guiding principles and core values, leaders ignore trust, integrity, caring, good stewardship, and accountability in favor of a particular outcome - a basis for a toxic culture.

Align procedures and practices with core values. Hire people of character, train, develop, and empower them. Accept mistakes as they grow and learn. Don't micromanage or rebuke them for learning curve blunders; use them to teach and learn. Values should include providing a safe environment. Don't compromise and "cut costs" associated with core values, like safety, to "save" money when times get tough. Do what's right and bear the costs!
When leaders and managers create procedures and practices contrary to core values, they confuse, frustrate, and cause disgruntled employees. Employees become fearful, accidents occur, rumors abound as toxicity creeps in. Values' statements need consistent decisions to affirm them.

Leaders build trust by action. Merriam-Webster Dictionary defines trust, the foundation of good communications, as "assured reliance on the character, ability, strength or truth of someone or something." Telling an employee eleven months later about poor performance doesn't help. Regular feedback shows care and a desire to listen, learn, and help the employee succeed. Employees need positive and negative feedback; positive feedback alone is as bad as none.

When the workforce see core values applied consistently, they know who you are and what you believe in practice. Leaders must respond to employees' legitimate issues. Share company performance with the workforce. Give them a chance to ask questions about the business, and share their challenges. With best intentions, it's hard to eradicate a rotten culture:

According to Gallup, the number one reason people change jobs today is for career growth opportunities. Yet, most firms do not engage employees. Worldwide, 85% of employees are disengaged versus 65% in the U.S.. Disengaged employees gossip, spread rumors, which breed toxicity, lowers productivity and increases turnover. Any wonder the average length of service of U.S. employees is 4.2 years; 2.8 years for a millennials, the largest generation in the workforce! To engage employees and eliminate toxicity, hire people of character, train, develop, and empower them. And appoint leaders who live the entity's values.

How Should Employees Respond to a Toxic Boss

One size doesn't fit all. Dealing with a boss with a toxic attitude (toxic boss) depends on the situation. Is she a micromanager, a bully, an ignorant and arrogant talker? Let's look at micromanagers:
Not everyone will work with micromanagers. Don't stay, grumble, and accept "this is the only way." Find a channel to present the toxic situation. That's what workers in Canada's Governor General's office did and succeeded. What about the bully bosses? Don't accept abuse. Seek help; but don't allow them to cross your red line.

Responding in a Toxic Workplace: A Case Study

I interviewed an individual over six months to learn about his toxic workplace. Robert (pseudonym), a vice president in a medium-sized, multi-location corporation, is one of seven reporting to the chief operating officer (COO). Robert's boss, Bill (pseudonym), a micromanager, reports to the chief executive officer (CEO).
Bill holds weekly meetings with fifty people: Robert's level (10 people) and the level below (40 people). At these "feedback" sessions, Bill speaks 99% of the time, delve in minutia, often criticizing the second tier for not meeting unattainable, inexplicable standards. Bill doesn't see the harm in bypassing his direct reports. He wants everything tomorrow and believes if you don't have needed resources that's your problem. You must deliver. Bill's approach frustrates Robert because Bill goes directly to his team with specific tasks without Robert's knowledge. Asking Bill to stop hasn't worked.
"Why do you stay?" I asked Robert.
"I believe I can make a difference in the bigger picture." Robert replied.
Robert follows the eight items above. He stays ahead of Bill, anticipates needs, and provides quality information. Robert's team funnels Bill's requests to Robert who clarifies them with Bill before he presents results to Bill. In Monday meetings, Robert takes questions about his division, which delights his staff. To date, it's working.
"Has Bill changed?" I asked Robert.
"No, but we are at peace, and we continue doing our best. We don't expect him to change, and we don't plan to leave." He replied.
The culture remains toxic. Turnover is high, stress rampant, and productivity low. Robert will not accept abusive language or behavior, and is considering meeting the CEO because of the rising stress and poor morale.

Robert is an executive with options. What about workers in a small business where the owner/boss creates toxicity? He shouts, distrusts, throws tantrums, demands long hours, and ignores tenets of healthy relationships? These employees have no safety outlet where they believe someone will hear and understand them. I interviewed several such folks. A few of them leave one toxic place for somewhere less bad, but still unhealthy! Others stay because they need the salary to survive. This is a real problem. Besides the eight points above, the other practical answer is prayer.

What Happens With Toxicity in a Team

This situation should be easier to fix because the basis for a healthy workplace exists at the leadership level. It needs effective intervention to learn the issues:
Sometimes one person won't get with the program. Delve deep to find out the cause. Is something happening at home? Often, the employee has valid concerns she won't discuss because she doesn't trust you. Maybe the team member needs reassignment to workout her issues. Provide funding for counseling, if needed.
Conclusion A toxic work environment is harmful to your health. Seek professional help if you feel trapped in your position. But set a red line and don't allow anyone to cross it. Beware: effects of your toxic workplace will spill over to your home, marriage, and family.
"Leaders" who promote self and take credit for everything are not leaders, but mavericks. Leaders develop and promote others, embed values-driven processes, and set and maintain the right culture in their firms. Research shows firms with positive cultures do better in many metrics. They attract better talent, record higher productivity and profits, have lower turnover, and higher employee engagement. Arrogant, rude, unethical leaders set unrealistic expectations, and create chaos which foster toxicity.
A toxic workplace will cause burn-out at any level. No organization is immune. Toxicity infects businesses, government, charities, and churches. Learn symptoms, identify them early, and work to change the culture. Though some creators of toxicity won't change, help them even if they must leave the organization.`
Michel A. Bell is author of six books including Business Simplified, speaker, adjunct professor of business administration at Briercrest College and seminary, and founder and president of Managing God's Money, a mission devoted to providing free Christian financial and biblical stewardship advice. For information, visit https://managinggodsmoney.com.
Article Source: https://EzineArticles.com/expert/Michel_A._Bell/762062