A Review of Eurohistory's Royal Exiles in Cannes: The Bourbons of the Two Sicilies of the Villa Marie-Thérèse 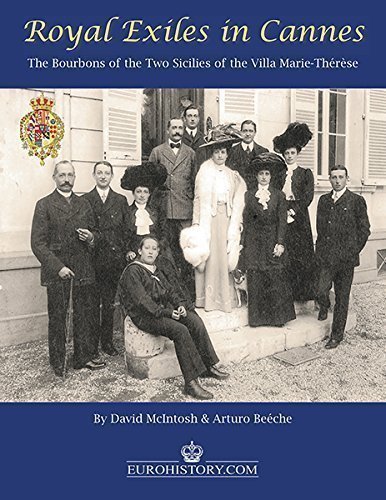 Eurohistory published Royal Exiles in Cannes: The Bourbons of the Two Siclies of the Villa Marie Thérèse by David McIntosh and Arturo E. Beéche in 2015. This historic work "includes more than 315 unique and rarely seen photos from both Mr. McIntosh's archive and the renowned Eurohistory Royal Archive. The book follows the history of this once mighty kingdom from its creation in the Middle Ages to its inheritance by the Bourbons of Spain, and its final incorporation into the modern Kingdom of Italy in 1860-61. Furthermore, and perhaps more fascinatingly, the book catalogues the saga of the various members of the royal family as they rebuilt their lives in exile, while also continuing to make matrimonial alliances with most of the ruling Catholic dynasties of Europe, among them the Habsburgs, the Spanish Bourbons, Saxony, Parma, and several others. The storyline follows the lives of the Bourbons of the Two Sicilies and their descendants to today. It is a unique production on a popular exiled royal family that has maintained a prominent presence among Europe's royals." The Bourbons of the Two Sicilies have not received focus by English-language scholars since the two works of Harold Acton.

In 2016, the author of this post wrote the following review of this book:

As far as I am aware, this is the only book in the English language that focuses on the Royal House of Bourbon-Two Sicilies after they lost their throne in 1860—this alone makes Royal Exiles in Cannes an invaluable resource.

Yet, Royal Exiles is more than just an informative tome on the dynasty. Yes, it offers wonderful vignettes on the Bourbon Kings of the Two Sicilies (Ferdinando I, Francesco I, Ferdinando II, Francesco II) as well as biographical sketches of the last King’s heir, Alfonso, Count of Caserta, and his wife (and first cousin) Maria Antonietta. However, the reader is also treated to chapters on the Count and Countess of Caserta’s many children and their countless descendants, who further expanded the ties of the Bourbons of Two Sicilies by marrying into the regal families of Austria, Bavaria, Brazil, France (both the Orlèans and the Bonapartes), Italy, Parma, Saxony, Spain and Württemberg…as well as plenty of other noble families around Europe.

However, for this reader, the greatest gem to be found in Royal Exiles in Cannes is the plethora of photographs of the members of the Royal Family of Two Sicilies. There must be four or five *hundred* of these images, if not more, which all come from the Eurohistory Photo Archive. From the long-dead kings of the Two Sicilies to the modern-day Dukes of Calabria and Castro, you become acquainted with nearly every Bourbon-Two Sicilian relation, both past and present. The visual feast that this vital historical work provides cannot be overstated.

Chuffed to have this book in my collection and highly recommend it!

Purchase the book from Eurohistory:

Posting Komentar untuk "A Review of Eurohistory's Royal Exiles in Cannes: The Bourbons of the Two Sicilies of the Villa Marie-Thérèse"