A POET AMONG THE ROMANOVS Starts Selling on Amazon Today!


Our next book, A POET AMONG THE ROMANOVS, by Jorge F. Sáenz is selling now. We just received the physical copies of this gem of a princely biography, which we will soon have in the hands of happy owners.

Clients can either purchase their copy at our website at http://eurohistory.com or they can purchase the book on AMAZON starting today!


Purchase the Book at Eurohistory:

Purchase A POET AMONG THE ROMANOVS at Eurohistory.com


Purchase the Book on Amazon:

Purchase A POET AMONG THE ROMANOVS on Amazon

Prince Vladimir Paley, first cousin of the last tsar, was a poet among the Romanovs. The rules of the Imperial Family prevented him from being considered a member of the dynasty due to the unequal marriage of his parents. This circumstance could have saved his life. Instead, when he was requested by the Bolsheviks to denounce his father, Grand Duke Paul Alexandrovich of Russia, young Prince Vladimir chose love, loyalty, honor, and affection. His only crime was being related to a dynasty of which he had not even been an official member. This is the compelling story of a young man, and a talented poet, who in different circumstances would have attained great heights. Destiny, however, played a sad role in bringing a brutal and early death to a promising life.
Jorge F. Sáenz brings to life the previously unknown figure of Prince Vladimir Paley. In doing so, Mr. Sáenz adds to a long and distinguished list of historical studies he has written over the last thirty years. His books number well over a dozen, most of them focusing on various aspects of Costa Rica’s history and unique democratic traditions, that make the country a bastion of democracy in Latin America. His study of the life of Prince Vladimir Paley was first published as a biographical essay in Eurohistory — The European Royal History Journal. The success of this essay led to the story of Vladimir Paley becoming a full-on book. Mr. Sáenz is a career diplomat for Costa Rica, as well as a distinguished law professor at the University of Costa Rica.
EUROHISTORY is pleased to announce the hardback publication of this rare and uniquely extraordinary work of royal biography! This book was first published in paperback nearly 20 years ago. The UPDATED and EXPANDED hardback edition contains more information than the original, as well as a new 24-page photo section different than the few images included in the original paperback edition! 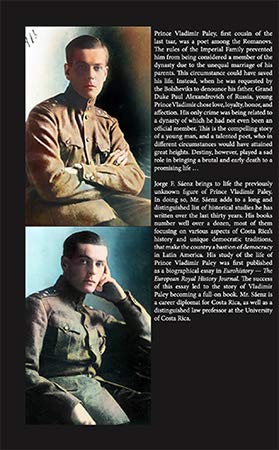 Posting Komentar untuk "A POET AMONG THE ROMANOVS Starts Selling on Amazon Today!"